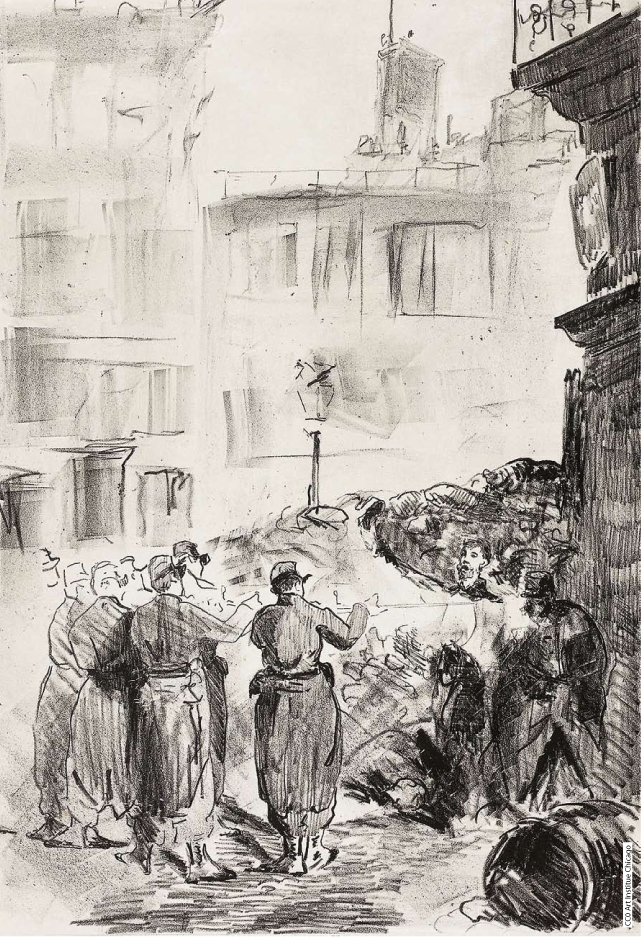 The Barricade by Édouard Manet (1832-1883).
Manet was a painter and a member of the Commission Fédérale des Artistes (Federal Commission of Artists). [1] 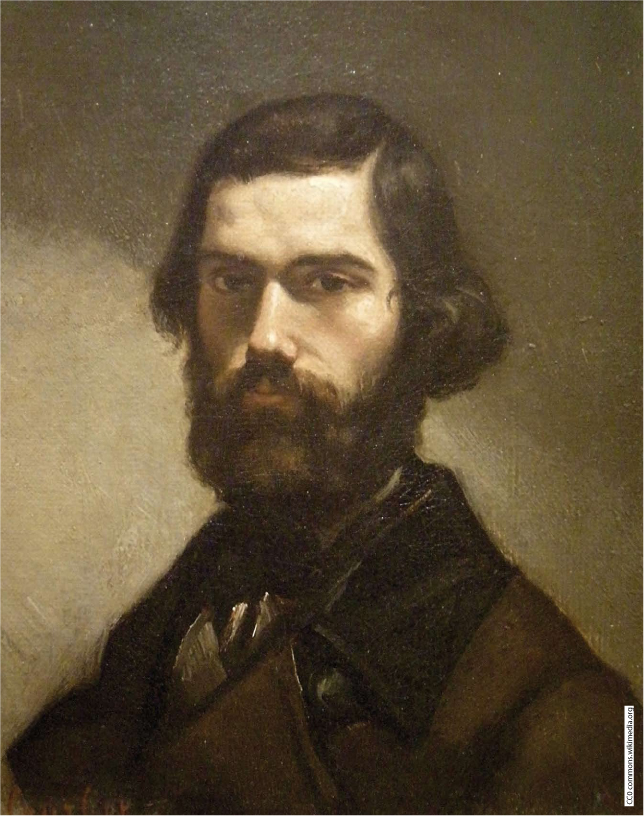 Portrait of Jules Vallès.
Oil painting by the realism painter Gustave Courbet (1819-1877). Jules Vallès (1832-1885) was a journalist and novelist. Like Courbet, he was an elected member of the council of the Commune. He fought on the barricades until the last day and then fled to London. Sentenced to death in absentia, he could only return after amnesty was granted in 1880. Courbet too was persecuted, imprisoned and financially ruined. He was able to flee to Switzerland, where he died in 1877. [2] 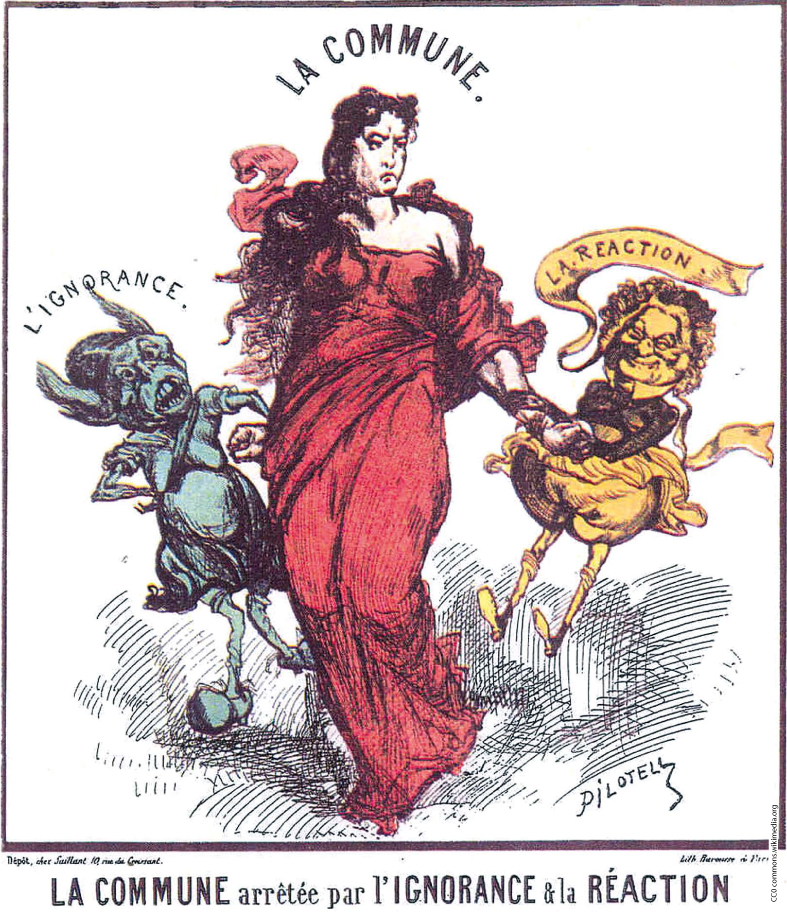 The Commune is arrested by ignorance and reaction.
By Georges Pilotelle (1845-1918), cartoonist and commissar of the Paris Commune, sentenced to death. Exiled in London where he became a successful artist without betraying his time in the Commune. [3] 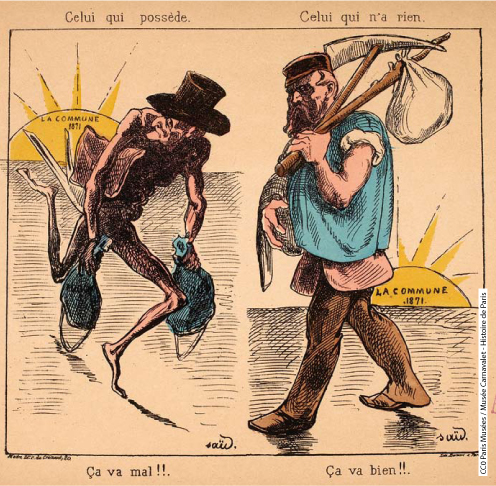 „The have-nots will fare well, the owners will fare badly“
Caricature by Alphonse Lévy (1843-1918), pseudonym Saïd. Caricatures held an important promotional function. They appeared in satirical newspapers or as leaflets in runs of 1.000 to 30.000 copies. [4]

In the run up to the commune, art was a business model and entertainment industry for the bourgeois society. Now it was to become democratised art for the masses. The Tuileries, the former city palace of the French rulers, was opened for viewing and for concerts and literature evenings. The proceeds went to the relatives of fallen and wounded communards.

Museums and libraries were open, theatres played to full houses every night. Theatres whose directors left for Versailles organised themselves. The commune supported this and placed the theatres under the authority of the Commission for Education. The commission invited artists, employees of the art business and interested parties to found cooperatives. This ought to put an end to the exploitation of cultural workers by a manager or a company.

Gustave Courbet, a painter of realism, invited 400 artists covering the fields of painting, sculpture, architecture, lithography and industrial art. Together they founded the Commission Fédérale des Artistes (Federal Commission of Artists) together with well-known artists such as Daumier, Manet, Dalou, Gill and Pottier, the author of L’Internationale (The Internationale). Its aims were the freedom of art, the abolition of privileges and favouritism, the equality of all members, the preservation of art work and the promotion of art education. 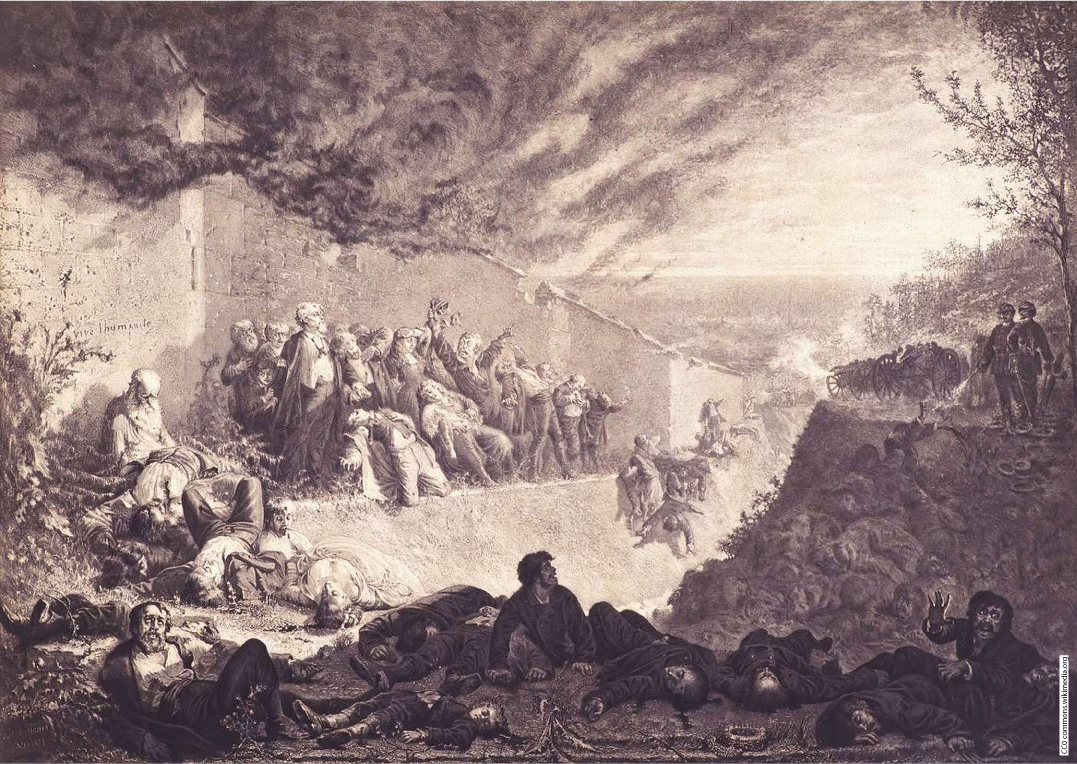 Le Triomphe de l’ordre (The Triumph of Order) by Ernest-Louis “Picq” Pichio (1826-1893).
It depicts the murder of communards by government troops. The painter was a Communard, a member of the Commission Fédérale des Artistes (Federal Commission of Artists) and fought on the barricades. [5]

Some artists were active communards. For example, the cartoonist Pilotell was the commune’s police commissioner, the writer Jules Vallès sat on the commune’s council and the poet Paul Verlaine was head of the press office at the town hall. Many were in favour towards the Commune. That alone was enough to be persecuted after its downfall. Exile, deportation, imprisonment, refusal to participate in exhibitions or lack of state commissions affected artists and cultural workers deeply.

Marie: Why did Matthis and you come home so late yesterday?
Laurent: We stayed longer at the barricades. Little Jaques was humming a tune non-stop. He had a terrible earworm that just wouldn’t go away. But we knew the song too and everyone joined in. We sang totally off-key. It was so funny. And then we added lots of verses. Guess which words rhyme with commune and Paris!
<< Previous
Deutsch
English
Next >>
Reference:
[1] CC0 Art Institue Chicago
[2] CC0 commons.wikimedia.org
[3] CC0 commons.wikimedia.org
[4] CC0 Paris Musées / Musée Carnavalet – Histoire de Paris
[5] CC0 commons.wikimedia.org