Skip to primary content
<< Previous
Deutsch
English
Next >>
The women did not ask whether something was possible, but rather if it was useful. Then its accomplishment would succeed.
Louise Michel (1830-1905), teacher, barricade fighter, anarchist, in La Commune, 1895
”
“

Women fighting at the barricades [1]

Women largely shaped the initiation of the Paris Commune. They organised themselves, demanded equal pay and equal rights and took up arms themselves.

On the eve of the Paris Commune

In the tradition of the French Revolution on the one hand and forced by the hardship of the Prussian siege on the other, the Parisians organised themselves into numerous neighbourhood committees, which became the basis of political women’s organisation. Another structure was the vigilance committees, which had already been founded at the beginning of the war. 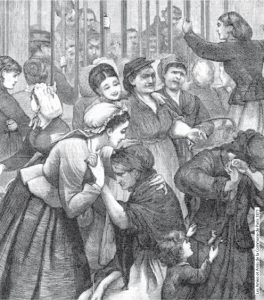 The Union des Femmes conceived the Commune as a historic opportunity to lead women to revolutionary views through specific assistance. Centralistic constituted, the Union therefore mainly reorganised work and provided food, clothing and military equipment. The vigilance committees, such as the women’s committee in Montmartre, are considered as counter projects. In their understanding, the commune was the result of a previous revolutionary history. Other organisations were le Club de la rue d’Arras, which founded a legion of armed women. Le Club des libres penseurs demanded utter equality, La Société pour la Revendication du Droit des Femmes wanted the improvement of living conditions for all women, regardless of their class. Le Club de Prolétaires participated in municipal government, even though women did not have the right to vote in the commune either.

Struggles amidst their own ranks

The women strove against the predominant anti-feminist conditions and tendencies within their own ranks as well. Furthermore a better education for girls had to be enforced. Additionally, the right to divorce was introduced and common-law marriages were recognised.

Women at the barricades

During the Bloody Week, women defended the barricades; more than one thousand were court-martialled after the defeat, humiliated and often defamed as prostitutes. While imprisoned, they maintained the spirit of solidarity of the Commune. Although their right that has been fought for were gone again, they laid another founding stone for the struggles for equality and liberation that followed. 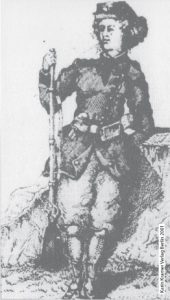 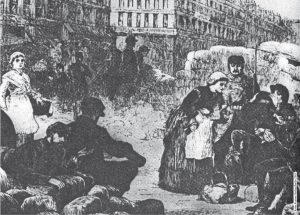 Laurent: Without the women’s organisational talent, half of Paris would starve to death.
Marie: My mum always says we’ll make ends meet, no matter how many mouth to feed. There will always be enough water to top up.
Laurent: But potato peelings remain potato peelings. You can mash and fry them as much as you like, but if they still contain those green bits, your tummy will ache, no matter what.
Marie: Yes, that’s right. Come on, we’ll help to find something to eat for later. Mum showed me the plants that are edible and where to find them in the city. Do you know what nettles, dandelions, sorrel and shepherd’s purse look like?
<< Previous
Deutsch
English
Next >>
Reference:
[1] (c) Splitter / Vents d‘Ouest / Lupano / Fourquemin
[2] Les Amies et Amis de la Commune de Paris 1871
[3] Karin Kramer Verlag Berlin, 2001
[4] Karin Kramer Verlag Berlin, 2001