Skip to primary content
<< Previous
Deutsch
English
Next >>
The first city in the world not only faced the unknown, but also belonged to unknown.
Arthur Arnould (1833-1895), journalist, councillor of the Commune, sentenced to deportation, exile in Switzerland
”
“

After the Commune took power, the bourgeois government and a large part of the bourgeoisie fled to Versailles. The government threatened the civil servants in the administration with dismissal if they stayed in Paris. So 3/4 of the administrative apparatus, about 75.000 civil servants, also left the city. They took their official stamps and seals, files and coffers with them. The city of Paris with its remaining 1.6 million people was paralysed.

The Commune had to ensure vital public services such as health, food, education, security, fire brigade, etc. as quickly as possible. To do this, it set up nine commissions to appoint the new heads of the administration. It could not fulfil the ideal, the election of the leaders by the workers, due to the time pressure. But there were many social improvements. The maximum salary for civil servants was set at 6.000 francs a year. This was equivalent to a skilled worker’s salary and was less than a tenth of the salary of the administrative leaders who fled. A minimum wage and approaches to self-management such as workers’ councils were introduced. The salaries of men and women were equalised, privileges and accumulation of offices abolished. 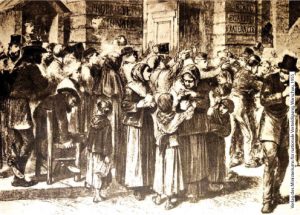 Distribution of food. Procuring this and keeping prices low was the most important task of the supply commission under the Delegate August Viard. [2]

The bookbinder Varlin became responsible for finances, the engraver Theiz was in charge of the postal service and the bronze worker Camélinat moved to head the mint. Theiz got the postal service up and running again within 48 hours and the mint was even able to improve its working methods.

Educational reform was to provide vocational, secular and free education for girls and boys, including arts and culture, as well as school canteen and distribution of shoes and warm clothes. Camille Treilhard began to reorganise the health service – away from church charity towards welfare state entitlement.

He could not finish his work. On the 24th of May he was arrested and murdered by government troops. The few weeks of the Commune showed: workers and the bureaucratic proletariat were able to keep public life going themselves.

Commissions („ministries“) of the Paris Commune 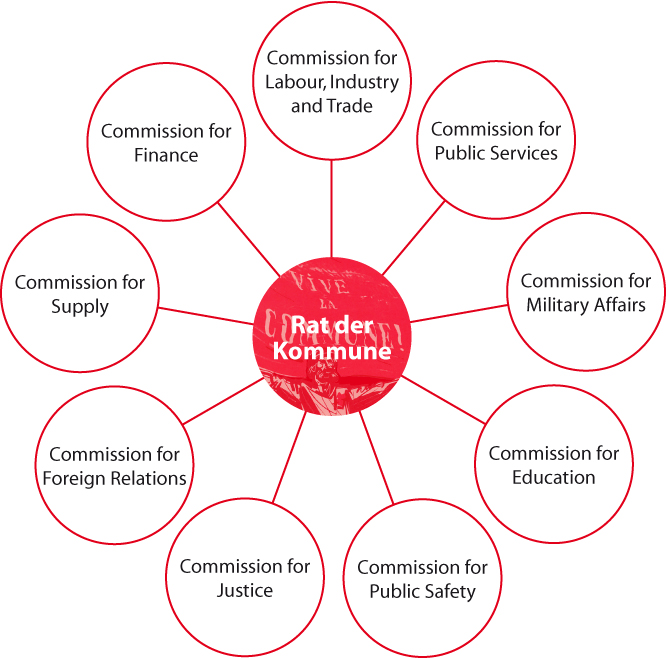 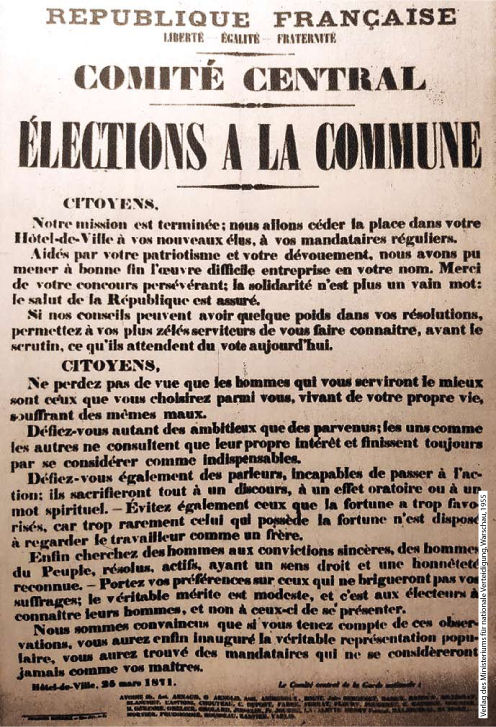 The National Guard confiscated the State Printing Office. The most important means of communication, the posters, were produced there. 900 workers printed 399 different poster motifs during the commune. 5 to 6 different ones per day; each with a circulation of several thousand. 50 people were bill sticking at all times.
Poster for the elections on 26thMarch, extract: “Do not forget that those people will serve you best whom you will choose from your own midst, who will live the same life as you and endure the same sufferings as you.”[3]

Laurent: You want to know something? I miss learning. But I hear there are plans to set up vocational schools. Imagine, our own schools in our Commune. With hot food, warm clothes and everything! For girls and boys! Finally, learning together, without fear of punishment or the martinet, that dreadful spanking whip.
Marie: Laurent! I know something: Louise Michel is a teacher. Maybe she’ll be a teacher in one of those schools again after we won.
Laurent: Really? A teacher, that wears the uniform of a guardsman? Great!
<< Previous
Deutsch
English
Next >>
Reference:
[1] CC0 commons.wikimedia.org
[2] Verlag des Ministeriums für nationale Verteidigung, Warschau, 1955
[3] Verlag des Ministeriums für nationale Verteidigung, Warschau, 1955