Skip to primary content
<< Previous
Deutsch
English
Next >>
If the proletariat wasn’t able to rule France yet, then the bourgeoisie couldn’t anymore.
Friedrich Engels (1820-1895), philosopher, historian, revolutionary, Introduction to edition of Karl Marx’ The Civil War in France, 1891
”
“ 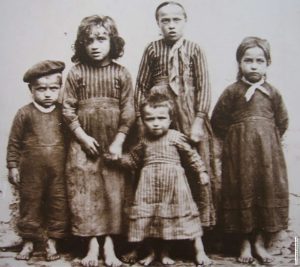 Children from the working-class district of Belleville in Paris [1]

The rapid capitalist development under Napoleon III (railways, armaments, public buildings, canals) led to a strong increase in the urban population and the proletariat. Of France’s 25 million inhabitants, 11 million lived in the cities, of which three million were labourers, mostly craftsmen and home workers.

Working hours of up to 16 hours a day were normal, so was child labour past age 8. Their work were, like that of women, essential for the survival for working-class families, since the cost of living was still higher than a worker’s wage.

Napoleon III pursued the expansion of the government, army and police; pillars of his favouritism and instruments of internal domination in the struggle against the growing mass of penniless artisans and the urban proletariat at the same time.

In the 1860s, despite repression, the workers’ movement took off and organised itself. In 1865, the French section of the International Workers’ Association (1st International) was founded.

„Paris – Capital of the 19th Century“

From 1840 to 1870, the population of Paris doubled to 2 million. Haussmann, the Département de la Seine, carried out a major urban renewal. Old quarters were demolished and large boulevards were built. That was the place to be for the bourgeois society who gained wealth through speculative profits. Meanwhile the ancestral population could not longer afford rents and was displaced. Paris became synonymous with the aspiring, modern metropolis, which was highlighted by the organisation of several world exhibitions.

The importance of Paris as the capital of France emphasised by the imperialist foreign policy associated with the name of Napoleon III, which plunged France into war with Prussia from July 1870.

Development of the Parisian working-class

Napoleon Bonaparte III (1808-1873) was Emperor of the French from 1852 to 1870 after a coup d’état. The form of government named after both Napoleons seeks an authoritarian administration of capitalist society by a directorate or individual on the top. By means of plebiscites, the ruler strives for a balance between the classes understanding himself as standing beyond them. In practice, Bonaparte suppressed the workers’ movement, pursued populist policies against the small peasants and waged several imperialist wars. The main supporters of the regime were the army and the church.

Marie: Over there, that’s where we live. Across the backyard to the cellar. Other people call our flat sous-sol – without sun. And that’s true, because it’s dark, cramped and damp.
Laurent: But as your mum always says: there’s always room for one more. I’m ever so glad you lot took me in. As a boy without parents, Paris can be a dangerous spot.
Marie: Here in our neighbourhood, everyone looks out for each other. It won’t work any other way, because the adults come home late at night and then they are tired from their hard work in the factories.
<< Previous
Deutsch
English
Next >>
Reference:
[1] CC0 commons.wikimedia.org
[2] Der Kinderbuchverlag Berlin, DDR, 1982
[3] Verlag des Ministeriums für nationale Verteidigung, Warschau, 1955