Skip to primary content
<< Previous
Deutsch
English
Next >>
No kings, no masters, no other-directed superiors, but responsible and deposable officials.
Statutes of the Republican Federation of National Guards, Tivoli-Vauxhall, 15th March 1871.
”
“ 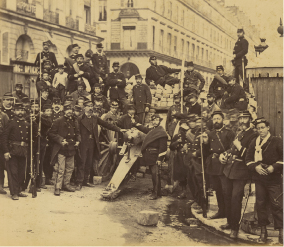 National Guardsmen at the barricade in Rue Castiglione. Photo by Bruno Braquehais (1823-1875). [2] 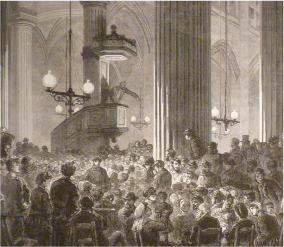 Meeting of a club in the church of Saint-Nicolas-des-Champs in the 3rd arrondissement (district).
Engraving by S. Melton for L’Illustration of 20th April 1871. [1]

The Commune was able to rely on a variety of grassroots democratic organisations. During the siege, there already were comités de vigilance (vigilance committees) in the districts. Among other things, they organised supplies for the population.

The armed base of the commune, however, was the National Guard, consisting mostly of workers and petty bourgeois. This people’s army made up of more than 300.000 men was armed to secure Paris after the defeat of the French army. They were anchored in the districts and organised in battalions. They elected their officers themselves, often well-known revolutionaries such as Louis-Auguste Blanqui and Émile Eudes. 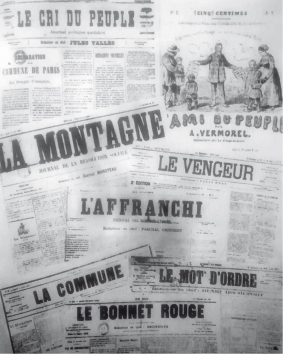 Some of the approx. 70 newspapers published during the Commune. These, together with posters and caricatures, were the main means of communication.[3]

Political actions were discussed and decided in large assemblies. About 1.500 delegates elected the Central Committee (CC) of the National Guard from 215 battalions. After taking power on 18th March, the National Guard CC called for the election of a council of the commune.

79 men were elected to the Commune Council; women did not have the right to vote though. Everybody wanted a democratic and social republic. Half of the members were workers and employees. Every other member had already been in political prison or exile. A quarter were organised in the International Workers’ Association (1st International), the first international federation of workers’ societies. Most were followers of Proudhon, few of Marx.

Pierre-Joseph Proudhon (1809-1865) was a writer and socialist. He sought change through rapprochement of the classes but took no account of the revolutionary class struggle through reforms. Karl Marx rejected both as narrow-minded and unrealistic.

Social and political organization of the Commune Council.

The Red Clubs carried on a long tradition that dates back to the revolution of 1789. During the Commune there were about 30 clubs, often residing in occupied churches. Church services during the day and at night gatherings of Red Clubs with hundreds to thousands of participants, most often more women than men. Political, social and military questions were discussed. The Red Clubs brought together the most revolutionary Parisians, criticised the Commune Council and made recommendations.

Laurent: There is one thing that I really don’t get: why are women not allowed to vote? And why isn’t there a single woman in the Commune Council? Surely they work and fight just as hard as the men. Just look at their barricade in Montmartre!
Marie: True that, it’s simply just wrong. Mum says when I grow up I can be whatever I want. Then I want to sit in the Commune council and we’ll improve matters.
Laurent: Oh yes! I will assist you! No women in the council – that will never do. I’ll fight for you, Marie. For Marie from Belleville, the first female councillor of the world!
<< Previous
Deutsch
English
Next >>
Reference:
[1] CC0 commons.wikimedia.org
[2] CC0 commons.wikimedia.org
[3] Verlag des Ministeriums für nationale Verteidigung, Warschau, 1955
[4] Thankmar von Münchhausen; 72 Tage, Die Pariser Kommune 1871 – die erste “Diktatur des Proletariats”, Deutsche Verlagsanstalt, 2015, S. 174 ff.