Skip to primary content
<< Previous
Deutsch
English
Next >>
Every step of real movement is more important than a dozen programmes.
Karl Marx (1818-1883), philosopher and economist, letter to Wilhelm Bracke, May 5th, 1875
”
“

With a few exceptions, the names of even the most active communards are no longer present today. But even with only a cursory examination of the commune, there are names that crop up again and again. To name just a few: Delescluze, Varlin, Léo, Michel, Frankel, Ranvier, Dmitrieff, Vallès, Arnould. Some had been politically active for decades and had already been through persecution, imprisonment and exile. They saw themselves in the tradition of the radical Jacobins, as social republicans, Blanquists, Proudhonists and Marxists.

No one was prepared for the commune, but all did their best for it. Many paid for the 72 days of hope for an end to the exploitation of man by man with death, imprisonment, deportation or exile. They drew different lessons from the commune and its brutal suppression by the ruling bourgeoisie. The communards turned to communism, anarchism or the organisation of socialist parties. Almost all of them continued to fight for a revolutionary change in capitalist relations. 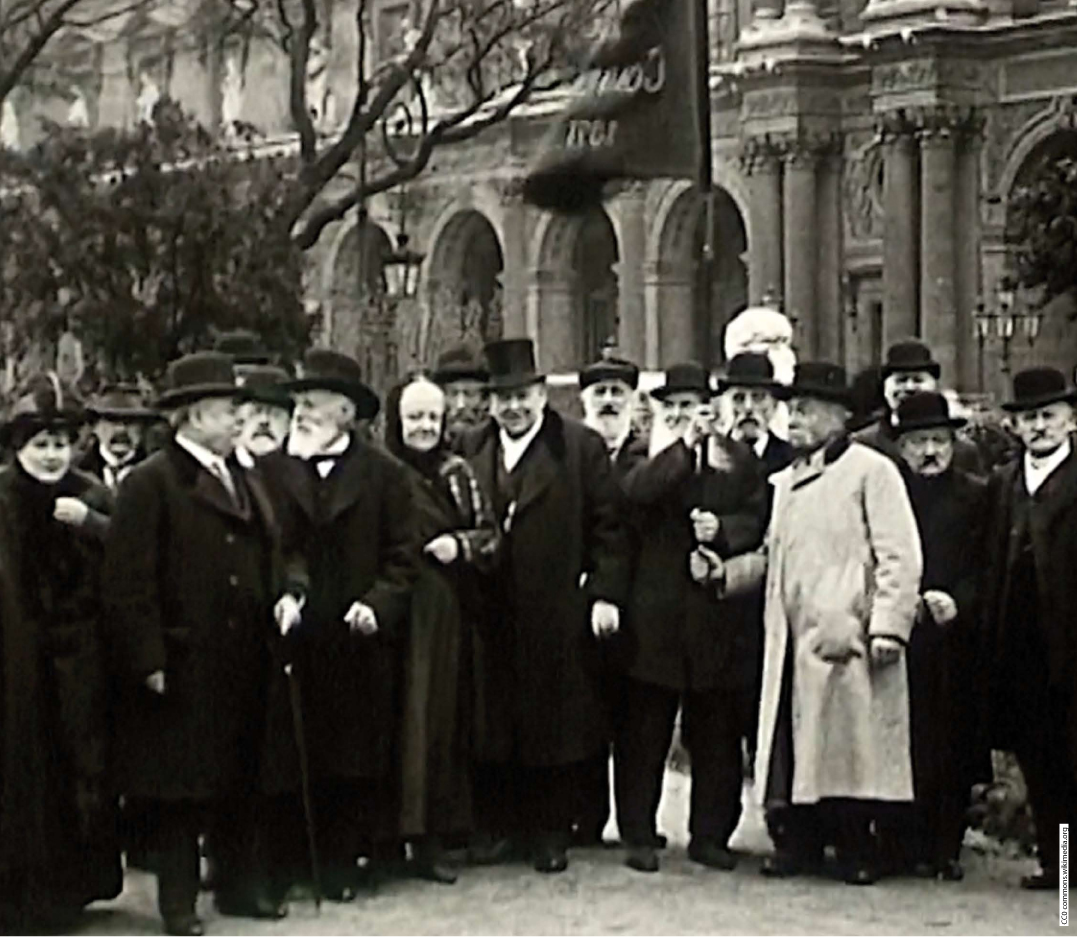 Former fighters of the Paris Commune 1914 in front of the Louvre – among them Nathalie Lemel, Zéphirin Camélinat and Jean Alemane. Still from the film La Commune by Armand Guerra [1]

Jean-Baptiste Clément (1836-1903)
Chansonnier and editor of socialist newspapers, imprisoned for this. Elected to the council of the Commune, barricade fighter, escape to London, sentenced to death in absentia. Songs by Clement still known today are Le Temps des cerises (Time of Cherries) and La Semaine sanglante (Bloody Week) about the massacres by government troops at the end of the Commune. [2] 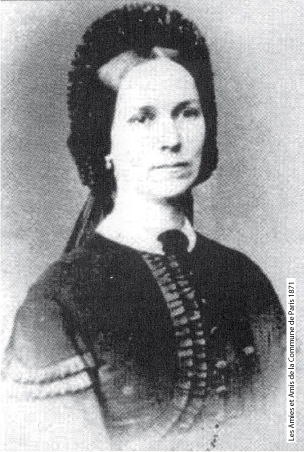 André Léo (1824–1900)
was a journalist and writer. The most important key note of her thinking is the conviction that the end never justifies the means, and her advocacy of the unconditional freedom of the individual. In 1866, the Société pour la Revendication du Droit des Femmes was founded in her home. Léo criticised the centralist structures of the Union des Femmes, but also antiliberal measures of the entire commune. In the summer of 1871 she had to go into exile. Fleeing to Switzerland, she remained one of the most determined opponents of the authoritarian tendencies of the International. [3] 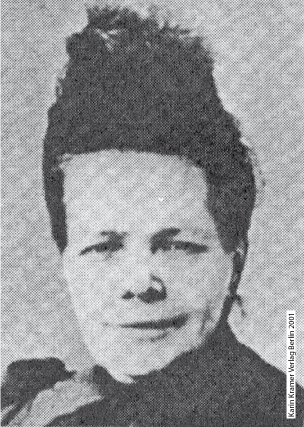 Nathalie Lemel (1827-1921)
Born in Brest, worked as a bookbinder. In 1845 she married Jerome Lemel, three children, later separation. A revolutionary socialist in the 1860s, she joined the International Workers’ Association in 1865. Fought for the right for equal pay. In the Commune, member of the Central Committee of the Union des Femmes. Fought on the barricades and cared for the wounded. After the defeat, exiled to New Caledonia. There she shared her cell with Louise Michel. In 1879 she returned to France. In 1921 she died impoverished in a hospice. [4] 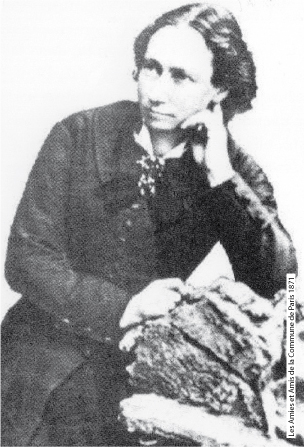 Louise Michel (1830-1905)
Probably the most famous Communard. Illegitimate child, she grew up with her paternal grandparents, with whom as well as with her mother she was closely connected throughout her life. In 1856 she went to Paris as a teacher. Fought on and behind the barricades during the days of the Commune. Her bid to kill A. Thiers, who was negotiating with Prussia, is famous. Deported to New Caledonia after the suppression. Returned after amnesty in 1880, then anarchist speaker. Seriously injured in an assassination attempt in 1888, but refused to hand over the perpetrator to the police. In 1890 she went to London. Her coffin was followed by a hundred thousand people. [5] 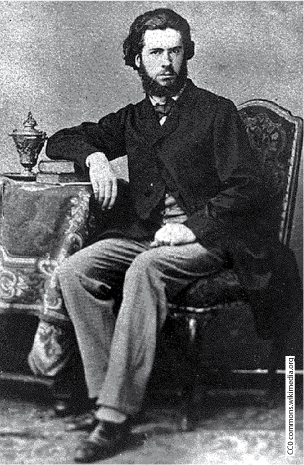 Eugène Varlin (1839-1871)
Poor farmer’s son, came to Paris in 1857, worked as a bookbinder. Active in the trade union and cooperative movement (founding of cooperative banks and restaurants), Proudhonist, advocate of gender justice. Imprisoned for membership of the International Workers’ Association and organising strikes. Before the Franco-German war in the anti-war movement, various functions during the Commune, fought on the barricades until the last day. Denounced by a priest on May 28th, abused by the mob and executed by government troops. [6] 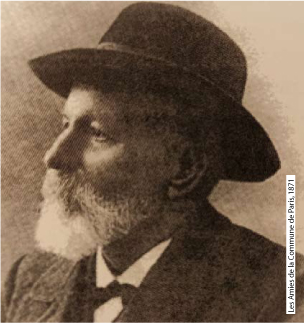 Zéphirin Camélinat (1840-1932)
Coppersmith, bronze worker, friend of Proudhon, trade unionist, member of the International Workers’ Association. During the Commune, director of the Paris Mint, barricade fighter, exile in London, sentenced to deportation in absentia. Returned to Paris in 1880. Active for the fusion of various socialist groups. 1924 First presidential candidate of the French Communist Party. [7] 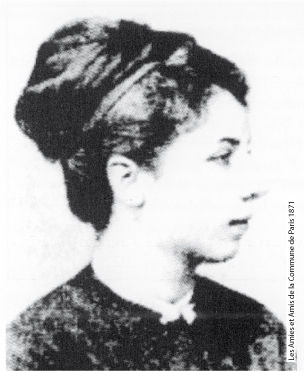 Elisabeth Dmitrieff (1850–1918)
From a wealthy Russian family. In 1869, the 19-year-old came into contact with the Geneva International. When the Paris Commune was proclaimed, this was the historical situation she had been waiting for. First joined the Comité des Femmes. Founded the Union des Femmes, which was controversial with other women’s organisations because of its centralist tendencies. After the suppression, returned to Switzerland, then to Russia at the end of 1871. She married and later lived in Siberia. She probably died around 1918. [8]

Paule Mink (1839-1901)
Daughter of a Polish officer and a French noblewoman. The family lived in Paris. 1866 member of the Société pour la Revendication du Droit des Femmes. Published in socialist newspapers, appeared as a speaker from 1868. She was convinced that the emancipation of women could only be achieved by abolishing capitalism. In the Commune she was active in various committees and organised a free school. Escape to Switzerland. Returned in 1880, became involved in various socialist parties. [9]

Élisée Reclus (1830-1905)
Widely travelled (Europe, USA, Central America) and world-famous geographer and anarchist. Active in the cooperative movement. During the Commune, a simple national guardsman, captured in the fighting on April, 4th. He described the ordeals of imprisonment in 14 prison wards. Sentenced to deportation, after protests by international scholars, commuted into exile. Then went to Switzerland, where he and his brother Élie became members of Mikhail Bakunin’s International. [10]

Alexis Trinquet (1835-1882)
Shoemaker, Blanquist, member of the Council of the Commune and the Commission of General Safety. Fought until the end of the Commune. Defended himself explicitly politically at court martial as one of the few of the council: “I am an insurgent, I do not deny it.” Sentenced to life deportation to New Caledonia, fell seriously ill there. Died two years after amnesty and return at the age of 47. [11]